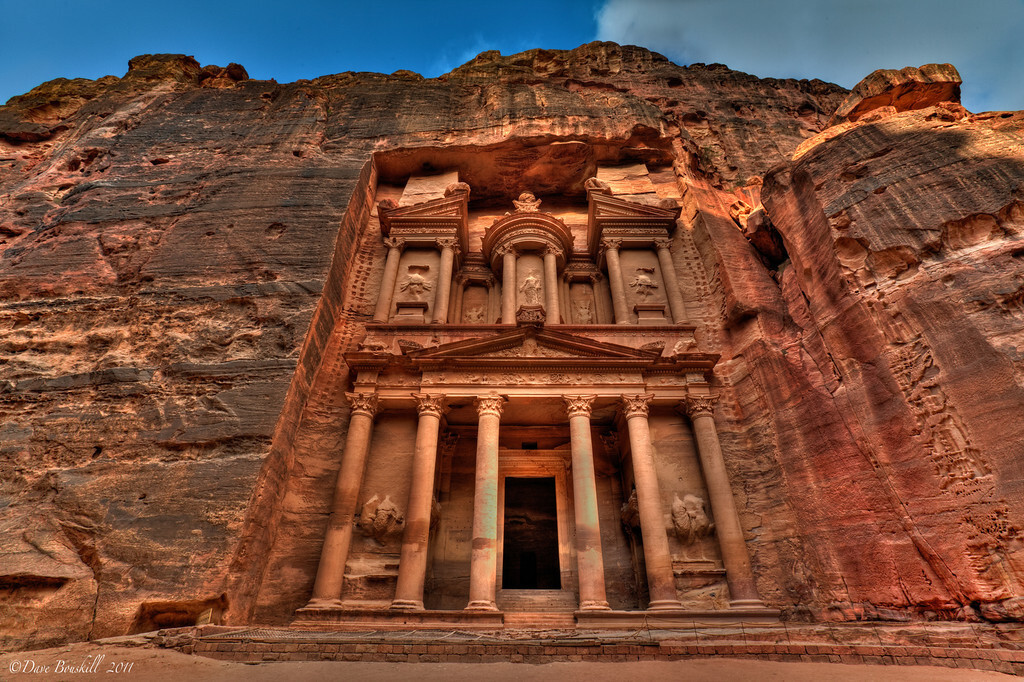 Jordan, officially the Hashemite Kingdom of Jordan (Arabic: المملكة الأردنية الهاشمية‎ Al-Mamlakah Al-Urduniyah Al-Hashimiyah), is an Arab kingdom in Western Asia, on the East Bank of the Jordan River. Jordan is bordered by Saudi Arabia to the east and south, Iraq to the north-east, Syria to the north, and Israel and Palestine to the west. Since the dawn of civilization, the country's location at the crossroads of the Middle East has served as a strategic nexus connecting Asia, Africa and Europe.

Archaeologists found evidence on inhabitance dating as far back as the Paleolithic period. Three kingdoms emerged on the territory of modern Jordan at the very end of the Bronze Age: Ammon, Moab and Edom. The lands were later part of several kingdoms and empires, most notably the Nabatean Kingdom, the Roman Empire and finally the Ottoman Empire from the 16th until the early 20th century. After the Partitioning of the Ottoman Empire after World war I by Britain and France, the Emirate of Transjordan was officially recognized by the Council of the League of Nations in 1922. In 1946, Jordan became an independent sovereign state officially known as The Hashemite Kingdom of Transjordan. The capture of the West Bank by Jordan during the 1948 Arab–Israeli War has showed that the Arab Legion forces known today as theJordanian Armed Forces were the most effective among the Arab troops involved in the war. The same year, Abdullah I took the title King of Jordan. The name of the state was changed to The Hashemite Kingdom of Jordan on 1 December 1948. It is a major tourist destination in the region and is especially popular with expat westerners seeking to live or study in its capital Amman. Not only is the Kingdom considered the safest country in the Middle East, but also considered as the safest Arab country. In midst of surrounding turmoil it has been greatly hospitable, accepting refugees from almost all surrounding conflicts as early as 1948, with most notably the estimated 2 million Palestinian refugees and the 1.4 million Syrian refugees residing in the country. Jordan continues to demonstrate hospitality, despite the substantial strain the Syrian refugees are holding on national systems and infrastructure. It is also the only safe refuge available to thousands of Iraqi Christians fleeing the Islamic State. Pope Benedict described Jordan during his 2009 visit to the Holy Land as a model for Christian-Muslim co-existence. 30% of the population was Christian in 1950, however, due to several factors (mainly the high rates of Muslim immigration) this percentage plummeted down to 6% in 2015. Although Jordan is a constitutional monarchy, the king holds wide executive and legislative powers. Jordan is classified as a country of "high human development" by the 2014 Human Development Report. Jordan has an "upper middle income" economy. Jordan enjoys "advanced status" with the European Union since December 2010, and it is a member of the Euro-Mediterranean free trade area. It is also a founding member of the Arab League and the Organisation of Islamic Cooperation (OIC). The country is one of the top ten largest contributors to UN Peacekeeping troops. Jordan has a well developed medical sector, making it a medical tourism destination. Also it has one of the world's highest life expectancies, over 80 years ranking it as the second highest in the entire MENA region. Although Jordan has very few natural resources, like being the second poorest country in the world in terms of water resources per capita, it has large investments. The reason behind this is the country's highly skilled workforce. Wiki

Day 1 Arrival Arrive in Amman, Jordan. Where you will be met and transferred to the Aqaba Airport.Day 2 AqabaAfter br... more

Where do you want to go?

Deb & Greg T., from CA, October 2005, Private tour of Morocco and Portugal - All of our lodgings in Portugal were wonderful. Especiall...